Sydney Bars with Signature Cocktails You MUST Try

If you’re looking at travelling to Sydney, it will be no shock to you that there is a rich culture in the heart of the city. From unrivalled views to historical landmarks, there are really a million reasons to visit Sydney. Today, we’re going to give you 6 more! 6 Sydney bars with signature cocktails you must try.

Sydney nightlife is another reason that people like to stick around. With Secret Sydney Speakeasies, hidden alleyway bars surrounded by street art and signature meals and cocktails available in a number of popular haunts, you’ll experience some of the best-tasting beverages and eats that Australia has to offer.

If we had to describe this menu, it’d be the one-stop-shop for hipsters and Facebook s*itposters. Millennials, you’re gonna have a great time here. I mean, the menu says “this time we meme it”. Come on.

Other drinks you’ll need to try if you make it past the zombie include condescending Wonka, milo high club and a double rainbow. Get it?

Maybe Sammy has been ranked the best bar in Australasia and #43 in the whole world. Taking out the award for the best international cocktail bar in ‘Tales of the Cocktails’ New Orleans competition, it’s no secret that their signature drinks are tried and tested worlds over.

Maybe Sammy has a real prestigious feel with an expansive menu, including mini cocktails for those who want to enjoy a little of everything without going overboard.

Old Mate’s Place has the environment explained in the title. A rooftop bar with a warm feeling of walking into an old mate’s place. Their signature drink is Future Thinking. Green Ant Gin, Lillet, snow peas, shiso, green apple, verjuice, bitters and whites.

This one is a popular stop for beer drinkers, wine lovers and cocktail experimenters alike.

PS40 is hidden in Skittle Lane, one of those amazing back bars you’re pleasantly surprised to find. It used to be a soda factory, so the setting is unique and definitely a travel tale to tell.

The signature drinks here are actually four house made soft drinks which you can drink straight or have incorporated into one of the cocktails on the menu – so really, they’re all a kind of signature.

Employees Only is located in a heritage-listed basement, so you get your fix of history and culture when you step into this bar. This is the absolute place to be for anyone who has a taste for the spiritual side, with tarot card readings available from the workers.

Their signature drink is Amelia which consists of Wyborowa Vodka, St. Germain Elderflower liqueur shaken with fresh lemon & puréed blackberries. The drinks and vibe of Employees Only Sydney are known worldwide, and they’re definitely something you won’t want to miss.

The Glebe Hotel has a fitting signature drink known as The Glebe Gimlet. It is Bombay, agave syrup and lime. Delicious.

Now the name of this bar definitely gives off magical and old-worldly vibes, which is a lot to do with the fact that the building dates back to the 1800s. It’s a grand building oozing with character. We think you’ll want to try a thing or two from the food menu, too. 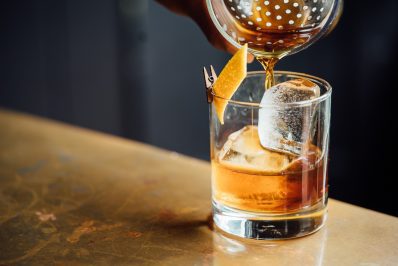 We see no reason why you can’t make a day of it and try these signature drinks from each bar. Remember to have a designated driver or an Uber on call though.

Of course, if you’re trying to see some sights as well as get your cocktail on, your day would be best spent on the Secret Sydney trail that shows you the location of some cool bars, gives a rundown on some famous street art and.. Well, the rest is a secret.