Melbourne is a treasure trove of culture and beneath the hustle and bustle of the business minded city, family filled shopping centres and rattling trams, there is a whole new world to discover with art, food and an indie vibe. A few hours to spare and an inquisitive attitude could have you exploring depths of the big city you’d have never thought possible, and a hidden side to Melbourne that will make you fall in love all over again. The café culture of Melbourne is lively and welcoming, with the espresso culture of Melbourne dating back around 50 years.

In fact Melbourne is internationally renowned for its boutique eateries, coffee stops and speakeasies, some of which are buried away in ‘hard-to-find’ local laneways that are beautifully decorated with electrifying street art. Ah yes, the street art! Much more than simple tagging and graffiti, Melbourne’s street art scene features some nationally recognised art works and is designed by local and global youths and artists. The City of Melbourne recognises their street art as a vibrant and integral part of their culture, and for good reason. When you see the art and learn the stories, it may be one of the most memorable parts of your stay (or a new favourite feature of your life-long home).

Being renowned as the Counter Culture Capital of Australia, and with some even claiming Melbourne to be the Stencil Street Art Capital of the world, Melbourne adopted stencil art very early on. With a New York-esque take on the legalities of street art, proper permission can be obtained to develop your very own artwork on the walls of the city while graffiti and tagging without appropriate permits is illegal and will be removed. This explains why all of the featured pieces are truly striking additions. There are a few hot spots for well recognised pieces, and going around finding and viewing them is one of the most fun things to do in Melbourne. Let’s discuss some of the key pieces of street art in the Melbourne CBD, and lanes dedicated to this rich activity.

This is the lane responsible for making the street art scene in Melbourne globally known. Stencils, paste ups, murals and more take place in Hosier Lane and while there’s a fine selection of local artists’ work here, international artists have made their way to this hot spot to leave their own marked on the renowned lane. If you let time get away from you, you could easily spend hours here viewing each piece; or you could take a tour to get some information about the artists and get familiar with the most popular pieces. Hosier Lane is also home to a lot of fresh dives, so a cocktail is on the cards if that’s your thing. 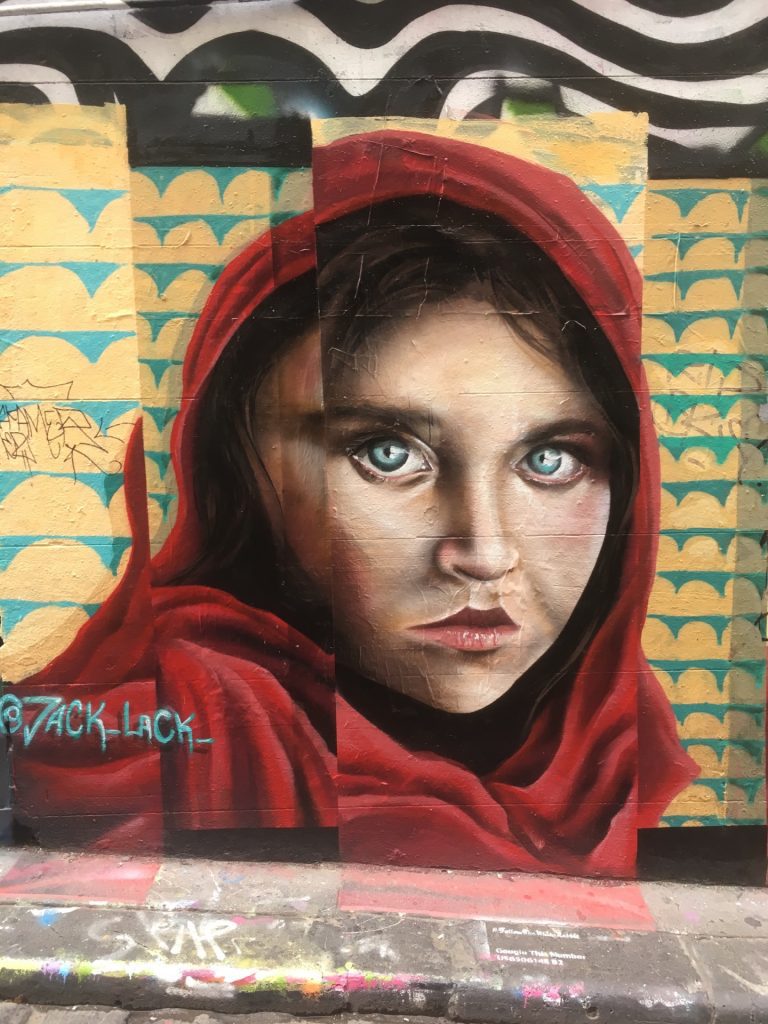 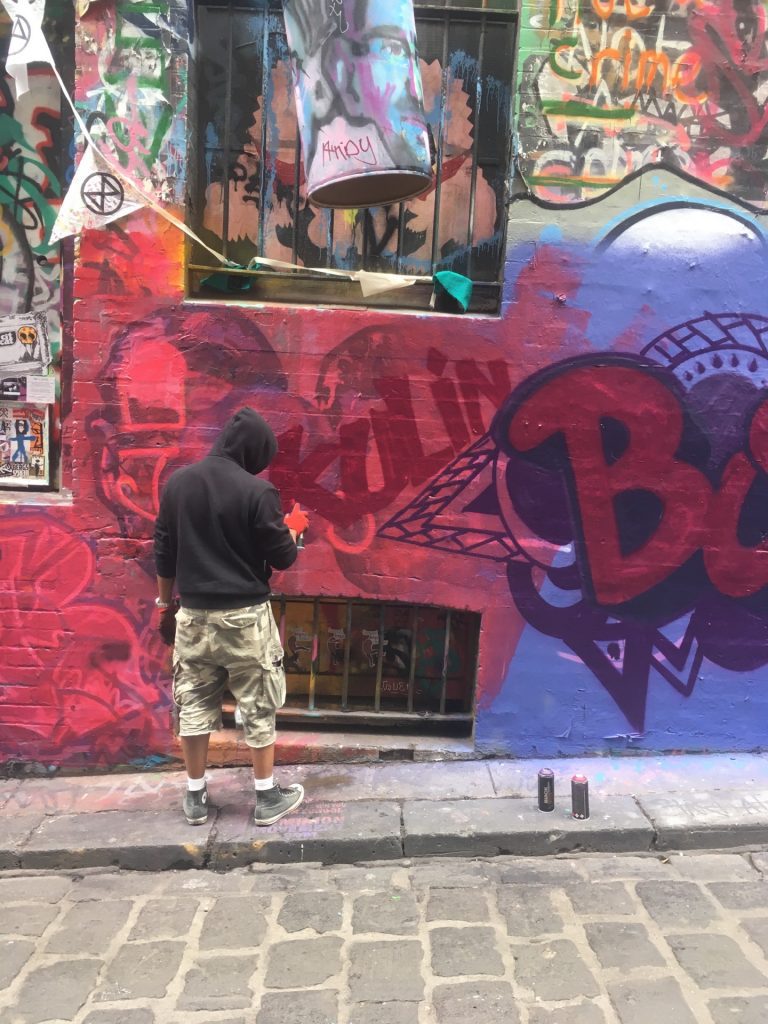 Street Artist in Action on Hosier

Named after the Union Hotel that was here in the 1860’s, Union Lane is another spectacle that attracts global visitors. A lot of the street art in Union Lane is speculated to have a political twist, making this space as thought provoking as it is awe inspiring. With 550 square metres of wall space, it’s not uncommon to see the artists working on pieces of a Sunday, which is just as fascinating to watch as viewing the art itself. Union Lane is a piece of history when it comes to street art, having started out as a grungy side lane that featured unsightly tags and graffiti until it was dedicated as part of the Graffiti Mentoring Project – a Melbourne City program designed to tutor and mentor youth to create real art and murals instead of traditional tags. The mural is widely respected now, and features more art than tagging although some unauthorised graffiti can still be spotted from time to time. 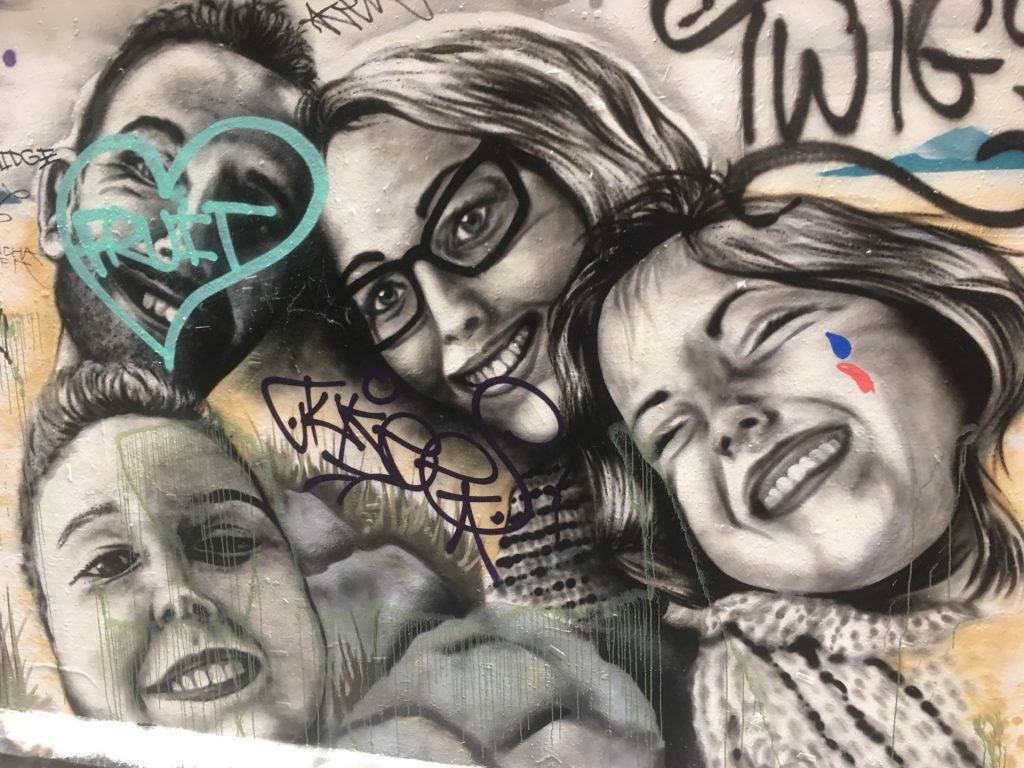 Named after the famous rock group in 2004, AC/DC Lane features – you guessed it – street art of musicians of all kinds. Some of the best street art in Melbourne can be found here, along with some of the best food! Check out Pastuso for Peruvian street food, or drop into the Cherry Bar for a night in one of the best known live music venues. This alley is thought to have been the hub of Melbourne’s rock past, and there’s so much to see. 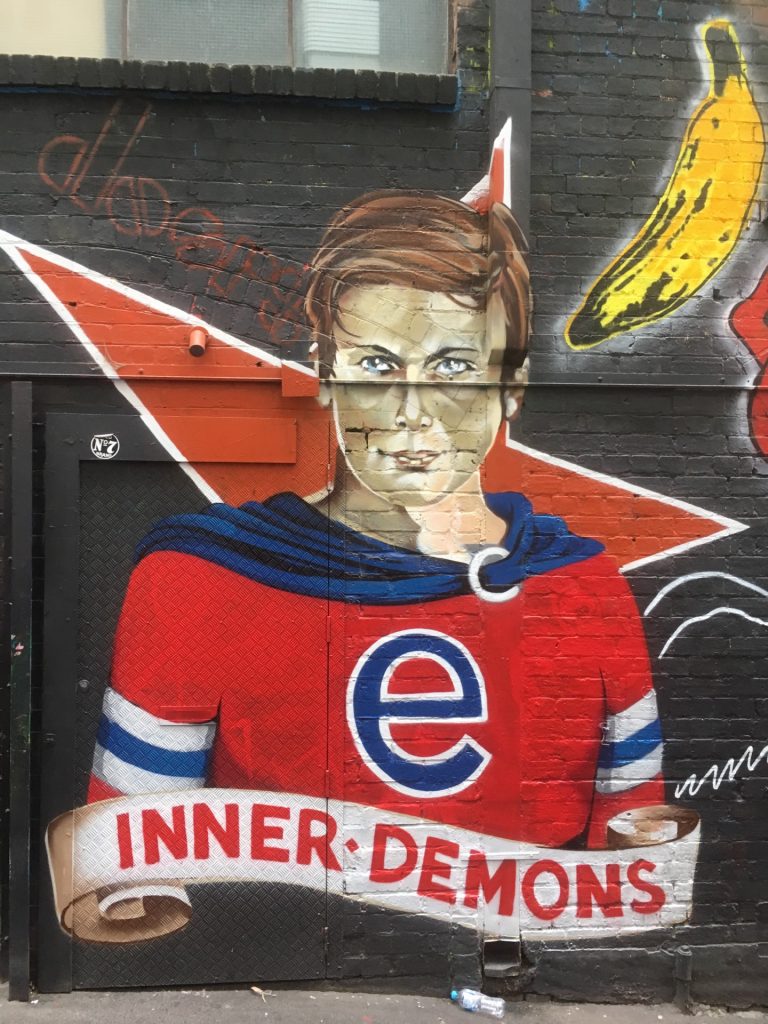 This was the birthplace of the St Jerome’s Laneway Festival, which is now an international affair. The artistic vibe never left this tin laneway, with art featured across the entirety of its walls. So it’s clear to see that all of these hidden areas are just as rich in history as they are art, and stepping into them is a chance to step into a whole new reality, if only for a little while. It certainly is a fun way to get a feel for the culture and rich personality of Melbourne.

The best locations made easy with Adventure Clues

While these lanes that are listed are certainly vibrant and exciting, there are over 260 of these street art laneways in the huge city – so you have the opportunity to explore and discover over a long period of time. From lesser known artists to international masterpieces, every single lane is worth a look if you can find them. Each lane is unique and bursting with its very own character. However, if you’re not into aimlessly wandering streets trying to find these sneaky little spots, Adventure Clues have quite the treat for you!

A fun thing to do in Melbourne is our Street Art Melbourne Adventure Trail. On this trail you will discover one of the most impressive and talked about street art lanes in the world. Take in the dizzying array of colours and solve clues based on the colourful characters you will encounter, which is a super exciting way to learn all about the history and concepts of the places you’re visiting as well as the pleasure of simply seeing them for yourself. Don’t worry – we won’t be sending you all around every lane in Melbourne, so you won’t have to take a week off.

Our team has selected the best of this bunch to incorporate the cool hidden bars and best sights. Get your camera at the ready and go ahead with the Melbourne Street Art Adventure Clues challenge. The cryptic trail leads you through local hot spots such as Degraves Street, one of the most popular laneways for food and coffee in all of Australia – globally recognised just like the art work we’re taking you to. Artisan, boutique and eclectic are often words used to describe this adventure trail, and it’s definitely one of the best ways to discover Melbourne. We can’t wait to see you there!